It’s a simple do-it-yourself health test, no equipment needed: Stretch your hands out in front of you and look at how long your fingers are. Most men have ring fingers that are slightly longer than their index fingers, while in most women these fingers are roughly the same length. 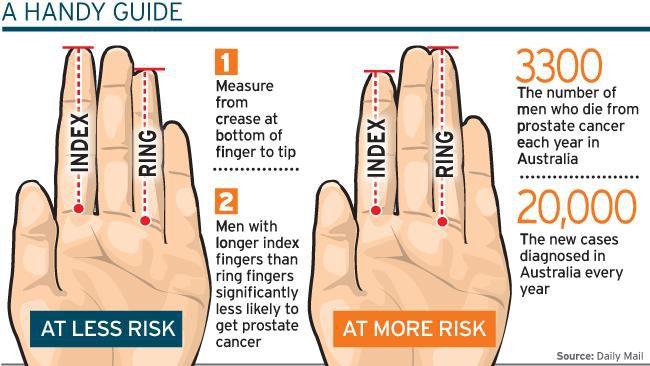 So what? Well, variations to these typical findings may have important implications for your health. It turns out that hormones released in the womb influence finger length and, as odd as it sounds, they also have important effects on future health and behavior. Gad Saad, PhD, professor of marketing and research chair in evolutionary behavioral sciences and Darwinian consumption at Concordia University in Montreal, and his colleagues have examined numerous studies involving finger length and found lots of interesting associations.

Dr. Saad refers to finger length as “a proxy of prenatal testosterone exposure,” explaining that the ratio between the index and the ring finger is determined early in pregnancy. The more exposure the fetus has to this predominantly male hormone, the more so-called masculine traits the adult will have (whether male or female) and the longer the ring finger will be.

Interesting fact: Having a long ring finger is known as the “Casanova pattern,” since Casanova was notably reputed to have a very long ring finger (in relation to his index finger). Dr. Saad told me that this means that “he had a highly masculinized digit ratio.”

According to Dr. Saad, early exposure to testosterone also affects how organs are formed, which is why this ratio is relevant to your future susceptibility to disease. In most people, the discrepancy between the ring and index finger is more pronounced on the right hand than the left.

FINGER LENGTH POINTS TO YOUR FUTURE

Your finger length is far from a perfect predictor of your health, of course, but you can consider it a helpful clue to what health challenges the future may hold — so you do all you can to circumvent them. For instance, if you are a male and your finger ratio suggests increased cardiovascular risk, ask your doctor to assess your heart health and pay close attention to cardio-related lifestyle choices such as diet and exercise. Plus, it’s a great conversation-starter when you need to make small talk — and that can be plenty helpful in life, too!

Testosterone Replacement Therapy with Boston Testosterone Partners , now available nationwide. We are New England’s leading choice for Male Wellness and Hormone Restoration for the treatment Low T, hypogonadism, Andropause and ED. Our medical director is a 25 year MD who has, for over ten years, been balancing both male and female hormones. He has been trained as a Hormone Specialist and has balanced well over a thousand male and female patients across the nation. Our patients have constant doctor interaction, he is always available daily to answer questions for our patients.

Our services also include proven medical weight loss systems for BOTH men and women utilizing a proprietary combination of B12, B3, MIC, Amino Acids and L-Carnitine specially compounded for our patients. We offer uniquely compounded SuperB and LipoC injectables and capsules, available only from our compounding pharmacy.

And, we offer TESTOSTERONE REPLACEMENT THERAPY FOR MEN with the THE LOWEST PRICES in the nation!